"If there is no struggle, there is no progress", so said Frederick Douglass. He'd have loved the SU... 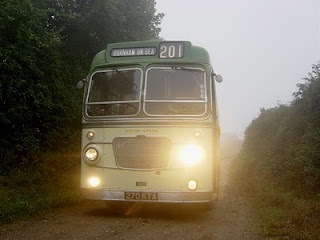 This weekend saw an historic moment in the project to rebuild 270 KTA's rear brakes. Pulling her out into daylight today, I put my foot on the brake pedal and... the thing actually stopped! This is progress. 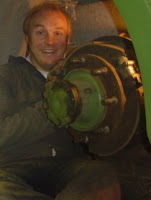 It's certainly a marked improvement on four months ago. The rear brakes were reporting an efficency of 30%, with the park brake barely holding it on the flat at 15% efficiency. Looking at the records from previous owners, the brakes had passed the last MOT in 2008 with just 1% in hand!

A strip-down and rebuild was the only option. It turned out that both sides, as well as being long overdue a general service, had some faults. 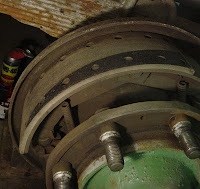 On the nearside, the top shoe was barely making contact with the drum when the brake was applied. Closer examination revealed that the steady-bolt (which should be adjusted to ensure the shoe is square with the drum) had been over-tightened, and so the shoe was so far out of alignment that only the outside edge was touching the drum. No wonder it was only 30% efficient!

On the offside, two big problems had coincided to wreck the shoes and the drum. Firstly, the hub bearings were loose, so the brakes were fighting against play and drift from the drum. Also, some twirp had seemingly been unable to fit the shoes onto the adjuster (admittedly, I found it difficult, too), so had left the adjuster butted-up to the shoe at ninety-degrees to the slot into which it was supposed to fit! 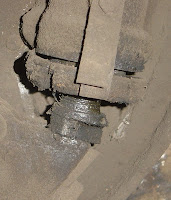 The steady-bolt issue had been down to worn threads in the backing-plate, so in both cases these had to come off and have nuts welded to them. This also gave a good opportunity to tidy-up the chassis and springs, and apply a few coats of silver. 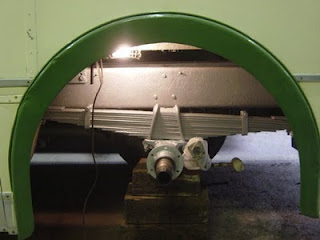 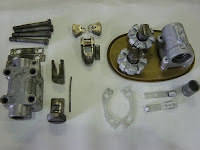 The bi-sectors and adjusters for each side were stripped, cleaned and reassembled with much copperslip (my new favourite smell), and newly re-lined shoes were fitted to both sides. Colin Billington was able to provide a brand new drum for the offisde, still chalked "BIDEFORD" from its days in storage with Western National. I was very proud to be the one finally to fit it to an SU...

Having completed the rebuild yesterday, today I adjusted each side in turn, before trying the results in the yard. A nice firm pedal was a sure sign of improvement, as was the alarmingly short travel on the handbrake lever, with arm work reduced by about 75%! As it happens, I've since removed the handbrake linkage for further tightening up, as promised - it's currently like the proverbial "stick in custard" at the back end. 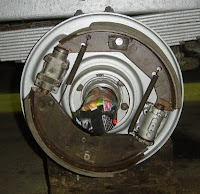 For now though, I'm reliving the sense of satisfaction I felt when hitting the pedal today, which eclipsed the many struggles I've overcome in the past few months. With another weekend's work, I'm confident I should be ready to try out those MOT brake rollers again for a slightly more brutal measure of my progress. 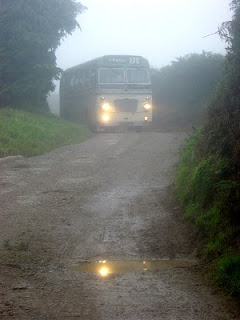 Whilst I've done all the work myself, thanks are due to my Dad, whose only hours away from the Chief Engineer's Advice Line in the last four months have been spent working at his lathe, machining parts for me. Thanks also to Colin Billington for his invaluable help in sourcing parts, and to a man I know only as "Kevin", who repairs tractors in the Devon hamlet of Woodleigh - he's the nice man with the mig welder, you see...
Posted by David Sheppard at 14:03