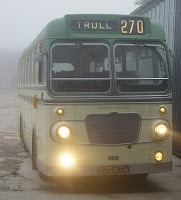 Dave Guscott - the affable boss of Guscott's Coaches in Halwill Junction, North Devon - will chuckle to himself when he sees what's booked in for MOT next Tuesday at 1000. It'll be the fourth time my name has appeared in the bookings this year.

We failed to reach North Devon for our first appointment back in March, after 270 KTA developed a heart-shuddering banging noise just a few miles from home.

Having replaced the diaphragm in the governor, we did make it across Dartmoor in April for our second appointment; however, given the braking problems which became all too apparent en-route, it's a miracle we made it back again.

On the third occasion - optimistically booked before I'd uncovered the full horror of the offside rear brakes - I chomped the hard bullet of realism and cancelled well in advance. 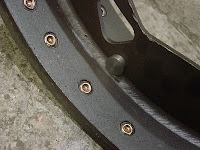 The reason so many West Country preservationists travel to Guscott's for their MOTs is that, unlike the majority of commercial MOT stations, Dave understands how old vehicles work. He sticks unbendingly to the rules, and crucially, he'll tell you if there's something wrong with your bus. In 270 KTA's case, back in April, there was: the brakes, which had somehow passed a test elsewhere just a year or so (and very few miles) previously, were far from up to the job. Not that I needed to be told after a terrifying drive...

"Otherwise, it's all good", said Dave, with words that give heart for Tuesday. 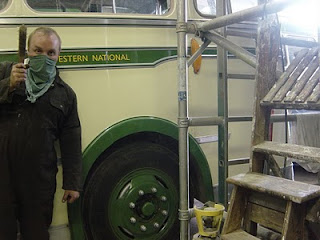 We'll see. This weekend I'll finish off servicing the handbrake linkage, and then spend some time adjusting the front brakes, which are actually pretty good as they stand. I'll then pull her outside for a good scrub inside and out.

One other prepartion for Tuesday will be the coning-off of five parking spaces in the BBC car park. Come what may, I'll need to be at work as normal on Tuesday afternoon, and will therefore be arriving by coach.

That should raise a chuckle, too...