The keen eyed* will have already observed that a new Winter banner has arrived on the blog, marking not only the coldest week of the year so far, but also twelve months since 270 KTA was delivered to her new owner.

It was Sunday, 6th December 2009, just days after I'd agreed to buy her, that she arrived from her previous home in Cornwall behind a tow truck. 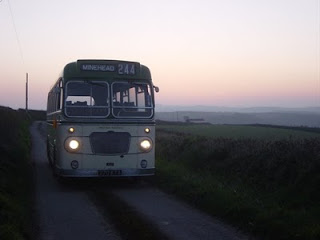 I remember arriving in a half-light to find her ticking over impatiently in the yard, her front panel missing and smelling strongly of leaking fuel, and the mixture of elation and horror in realising it was now over to me.

Who would have believed that twelve months on, the elation would still be just as strong (as is, at times, the horror.. and come to think of it, the smell of leaking fuel - but we'll say nothing of those). My aims for a return to the road within weeks of that day have proved naive, but there's been much progress, and an awful lot of learning to be proud of.

And proud I am, of us both. 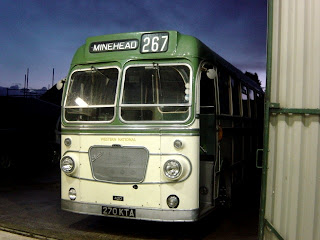 We eventually put her inside, before spending the rest of the evening in darkness trying to revive the tow truck, which had itself conked out. I chose not to take it as an omen...

*Those with even keener eyes will observe that my Winter theme has called for some artistic licence. The SU on the right of the banner is in fact 273 KTA, seen crossing snowy Dartmoor sometime between 1969 and 1971. The terrain is just like that which her sister will need to conquer en route to MOT next year. As for the weather, well...
Posted by David Sheppard at 15:25