Ahead of my first weekend of hard work on 270 KTA in 2011 (the first of many), I thought I'd share some photos from the past which have presented themselves over the festive period. 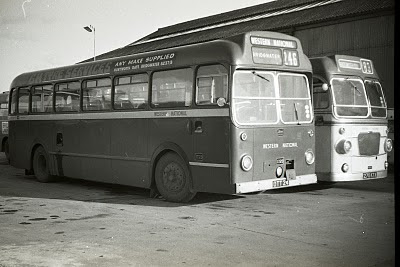 Keith Jackson has kindly shared his shot of '1220' (as she'd then become), lurking behind LS 1728 at Bridgwater depot. This is the only shot I've seen during her days at Bridgwater, home to several SULs over the years, including 270 KTA between October 1971 and March 1973 - oddly, a lesser chronicled era in its history.

Thanks also to Peter Delaney for alerting me to a shot of her in early preservation days, taken inside her new home at Western National's Laira Bridge Depot (Plymouth) in 1997. 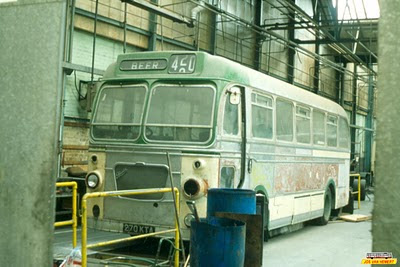 Perhaps the most revealing of all has been discovered by Luke Farley, a colour shot taken at Newton Abbot bus station c.1974 during her days as the lone poppy red SUL coach, Devon General 1220. Close examination will reveal that headrests have been lopped off as part of the downgrading from dual-purpose to bus status and, interestingly, additional seats have been added to increase capacity from 33 to 37. She was the only SUL to be so treated. (See right.) 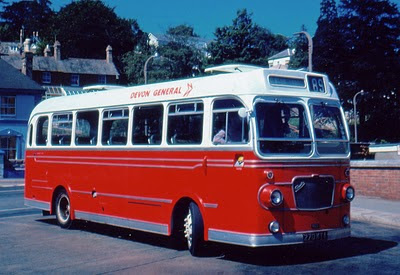 Many have suggested, given the uniqueness of the conversion, I should return her to poppy red B37F condition - but I'm bound to resist, at least for now. Of course, it's true to say the 'red fleet' holds a slightly lesser place in my heart than Western and Southern National, but that's not the only reason I'm keen to stay green. As probably the best-travelled SUL coach in terms of allocation, most notably finding its way to Trowbridge in 1968, 270 KTA has an equally interesting and unique history through its Western National days, too. 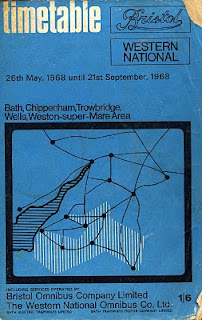 Speaking of which, I've recently acquired a well-loved copy of the 1968 timetable for WN's Trowbridge area services, some of which would have been operated by 270 KTA in the era I'm aiming to to recreate in her restoration.

As you'll see, the timetable carries dual branding for Western National and Bristol Omnibus, a sign of what was to come in January 1969 when the depot and its buses were transferred to Bristol Omnibus. As a comparitively modern vehicle, 270 KTA escaped and fled to Taunton with days, or even hours, to spare...

If you have any photos of 270 KTA in service, I'd love to see 'em. Please contact me at david@davidsheppard.info
Posted by David Sheppard at 15:18