Well done to the many bright sparks who spotted the significance of the date of my last post. Those who didn't will be pleased to hear that 270 KTA is, in fact, still as green as she was on March 31st. 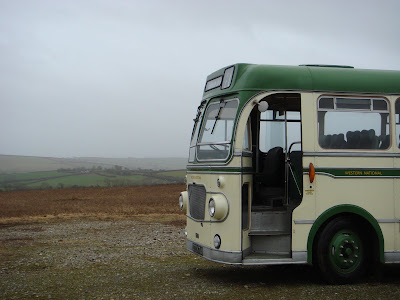 Unlikely though it may seem, tonight's post isn't a trap for the April Fool. There may soon be a chance to buy your very own Bristol SU coach for just £30...

At roughly 4.5" x 1", these ones are slightly smaller than mine, but they're even more suitable for narrow routes with weight restrictions - and critics would point out they're probably just as powerful as the originals.

If I get my way, 270 KTA and her cousins may soon be faithfully reproduced in OO-gauge model form. Some years ago the Little Bus Company produced a resin kit of the Bristol SU coach, but having been obsolete for a while they're almost impossible to come by.

There are no plans to re-introduce it to the range but, following much badgering from 270 KTA's scribe, LBC have agreed they could produce a limited number - if, and only if, I can get enough pre-orders to make it worthwhile.

At the moment I'm just over half way, and need some more interest.

SU fanciers, of which there are a few, will take little persuasion. Enthusiasts and modellers should be interested on the basis that this is something a bit unusual to add to your collection. But there's another big reason you might want to part with three tenners...

The SU coaches of this style celebrate their 50th anniversary this year and next (much more to follow soon, of course...), so a kit made in the next 18 months would be more than a little bit special. Plus, it's almost certainly the last chance you'll get to own one...

If you're still undecided, here's a picture of Keith Jackson's very sweet and well produced example, waiting to pick up happy holiday makers from the beach shop.

Keith's painted this one in his own Island Traction livery, but there are a good many possibilities for liveries actually carried over the years - at least nine variants for Western/Southern National green/cream or green/white, Devon General poppy red/white, Deltatours red/cream, Guernseybus white, Channel Coachways cream/maroon... and so on.

Which is why I'm putting myself down for four or five of the buggers.

One quick thing. Because they're sympathetic and keen to help, LBC would be offering these at cost price. I won't be making any money on them, and I'd therefore ask you to respect that too. (If I find any on eBay I will send the big 270 KTA to hunt down the vendor and leak oil on them...)
Posted by David Sheppard at 15:29 No comments:

I'm delighted to say that, at long last, both the paint and the vinyls have arrived for 270 KTA's forthcoming repaint.

Although I'd planned to wait until mechanical work had been completed before I started on the cosmetics, I haven't been able to resist. 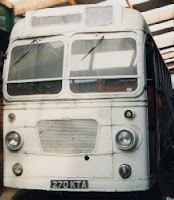 Here she is earlier today, with the base coat of overall white complete, rubbed down ready for topcoating.

By the weekend I hope to be applying the dark blue skirt and pink embellishments, with matt black window frames to follow next week.

I'm currently debating the best location for the 'First' fleetname on the front - above or below the grille.

If you have a view, please get back to me no later than midday today...
Posted by David Sheppard at 01:02 3 comments: