So here it is, my secret weapon in the fight to have 270 KTA on the road by mid-June: A WEEK OFF. 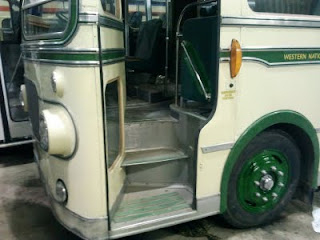 Before I bring you up to date with all the good progress I've made in the last few days, I'll quickly mention that I now own an expensive battery charger.

This wasn't a planned purchase - 270 KTA decided it was time for me to have one, and since my gruelling schedule for the week depends on being able to move her about, I took the hint. I'm worried this is turning into a marriage...

Having reclaimed various lumps of SU from my kitchen, I managed to get the hub and drum fitted on Saturday, together with the now gleaming hubcap which has taken hours of work... 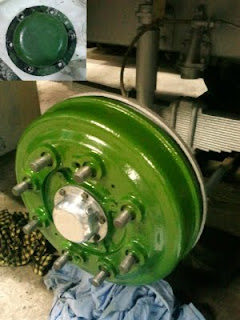 Polished is how they were when new, and many depots made the effort to keep them looking good for years. Many didn't, and they were often just painted over. My photo collection shows that, irritatingly, 270 KTA's stayed good throughout its working life, only to be rubbed down and painted green during its early days in preservation. I've had to strip the paint and then get rid of the scratches using three grades of sandpaper, rubbing compound, wire wool and finally polish.

Today we hit the ground with the re-fitting of the wheel (the wheel saga continues, so I've repainted the existing one as a temporary measure...), and a coming down from the blocks on which 270 KTA has rested for a couple of months. 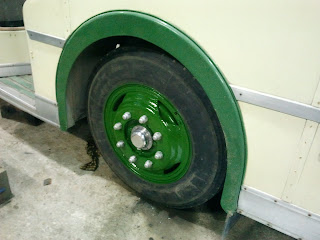 While batteries were charging, I thought I'd tackle the refitting of the new exhauster - a great idea in terms of maximising use of time, but otherwise a terrible idea. This involved laying on my back in a pool of oil roughly the width and length of my body, most of which had leaked out through the somewhat inadequate seal I'd achieved when I first fitted the exhauster.

Time will tell if I've done a better job this time; for fellow SU owners, the problem is that the oil return passes directly through the edge of the very gasket which is supposed to stop it from leaking to the outside world! Another fine mess...

Tomorrow, batteries permitting, 270 KTA will face South-West ready for me to tackle set-of-brakes 4/4. And another bloody hubcap. Thank gould for holidays...
Posted by David Sheppard at 13:59 No comments:

The pressure is on - I've started working nights...

And, as the keen eyed will spot from this shot of my newly painted hub, I'm also working from home. Believe me, the coffee perculator is not just illustrative... 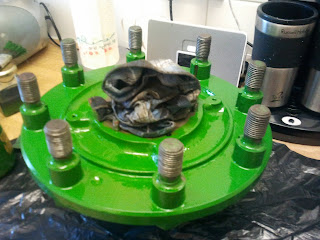 The time it takes for paint to dry is often a limiting factor in how much can be achieved in a day or a weekend, so I've realised that if I'm to make the Royal Blue Run on June 18th (precisely a month away), lumps of 270 KTA will have to come home with me to be painted overnight. 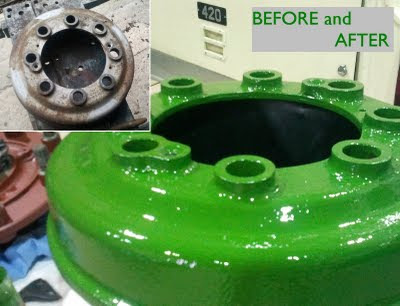 Seeing the hub and the brake drum gleaming is quite a boost; they're the first bits to be outshopped in the correct shade of Tilling green, as original. The green paint used by the previous owners is pretty flat by comparison, a poor approximation of the original really, and I can't wait to get rid of it. These bits, though only just visible when fitted, mark the start of my putting things right in the cosmetic department.

Speaking of putting things right, here are the reassembled offside-front brakes. The cylinders were totally seized before, but have been stripped, cleaned and rebuilt with a liberal application of copperslip. Unlike the cylinders on the back, both have a right-hand thread which means they adjust in opposite directions to one another. When it comes to it, you must remind me, the top cylinder turns 'up' to tighten whilst the bottom one turns 'down'.

I've made drawings, but I know I'll lose them.

Next task is to refit the hub, the drum, the hubcap (polished to perfection) and then.... the wheel. But which wheel?

I've promised a full blog on the find-the-right-wheels debacle - an unlikely but, I promise, rich source of comedy - and that will come in due course. But with telephone call number nine to return in the morning, the story is ongoing.

Could it be possible that, at the eleventh hour, I may finally have some correct style wheels to fit? I'm starting to think I'm the only human being alive who would notice the error if I didn't.

All the more reason to make sure I get it right.
Posted by David Sheppard at 15:26 No comments:

So far in our history together, 270 KTA and I have not been good at meeting deadlines.

If we had been, we'd have been on the road over a year ago. 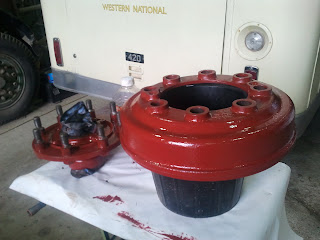 Instead I've chosen to do the decent thing, and forego the immediate pleasure of attending rallies in the hope of making up for many years of lost maintenance in the care of others. And slowly, we're getting there. 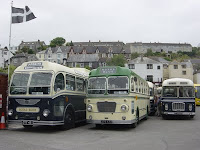 But every preservationist knows it's good to have a deadline... so long as it's months or years away. What a shame the annual Royal Blue run, a recreation of a route from one of the country's most notorious coach operators, looms large on June 17th.

Last year's run saw twelve or so coaches complete the treck from Stevenage to Penzance and back to Exeter, a spectacular adventure when you consider that most were between fifty and sixty years old.

This year promises an equally adventurous treck from Oxford to Newquay and back, all using the old roads rather than the motorways and by-passes which have overtaken them. 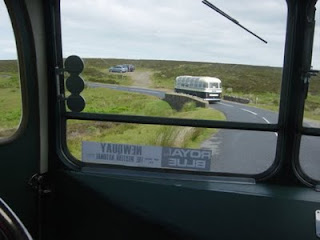 270 KTA ran as a duplicate on many Royal Blue services during her time as a touring coach between 1962 and 1968, and since then, frankly, she's missed out on enough fun. 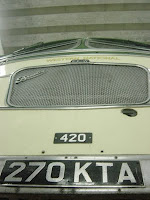 So I'm determined we'll be there, at least for part of the run.

As well as weekends between then and now, I have a week's holiday to dedicate to the cause, making some fourteen days of solid toil. Throw in the odd evening, and I reckon we could be roadworthy in time, if far from concourse d'elegance.

(By the way, the deadline by which 270 KTA must both perform AND look nice comes next year, when we have its 50th Birthday to celebrate - more on which soon.)

Primary jobs are to finish the front brakes, sort out the fuel pump which is currently overfuelling and causing clouds of black smoke on hills, refit the new exhauster which is leaking oil (one step forward, etc...), and tighten up the gear linkage, currently like the proverbial stick in treacle.

All important if we're going to be out in this... 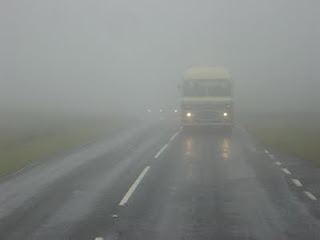 There are, of course, a million other jobs - the 'orrible taped up steering wheel, the lack of power to the power-operated door, the driver's seat which is more foam than leather... but all this can wait. Until July.

Last weekend saw progress on the brakes, which I'll be reassembling on my next visit. I've also had various leads on some correct-style wheels thanks to an advert in Old Glory magazine, which attracted three calls within 24 hours of going to press (quite funny, and worth a blog post in its own right - watch this space).

We've everything in our favour but time. I can't stay around here chatting... 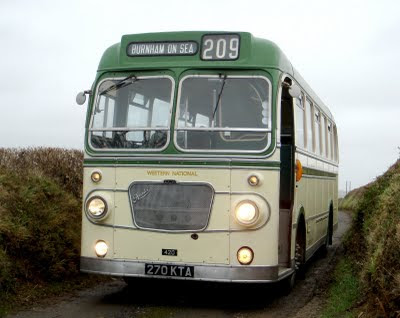 Posted by David Sheppard at 16:40 No comments: