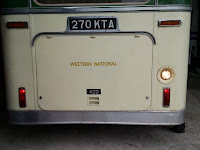 After the best part of a year spent chasing problems from one hub to another, from the exhauster and servo to the handbrake and back again... I am now the proud owner of an SUL coach that both goes and stops

This is quite an elite club!

With invaluable help from the Patron Saint once again, the weekend has been spent rebuilding wheel cylinders (we managed to make 4 good ones out of 8), bleeding and adjusting brakes, readjusting the handbrake linkage and eventually getting 270 KTA back down on its feet.

And after a few white knuckle emergency test stops on the driveway to the farm, it's fair to say that if you wanted to run out in front of a bus, 270 KTA wouldn't be a bad one to pick. (Assuming you wanted to survive, of course...)

It hasn't always been thus. The last MOT (before I owned it) shows brake readings within 1% of a fail. My first drive in it almost ended in tragedy at the Derriford Hospital roundabout. At least it would have been convenient...

You might wonder why putting it right has turned into such a job.

Here's what was wrong with the brakes...

- On the nearside rear, only one-third of a brakeshoe was making contact with the drum. The steady bolts (which should align the shoes with the drum) had lost their threads, so they'd just been tightened right up, pushing the shoes way out of line.

- On the offisde rear, the lower shoe ws sitting badly and had ripped the linings of both the drum and shoes to pieces.

- On the front, the offside top wheel cylinder was completely seized, as was one half of the bottom cylinder on the nearside. Inside, all four cylinders were knackered.

All the adjusters, front and back, were seized.

- The handbrake linkage was seized, and most of the rods were too long, meaning that what the lever was trying to do at the front wasn't necessarily happening at the back!

- Plus the servo assistance was minimal, given it was operating with next to no vacuum. The exhauster was failing to generate even a quarter of the vacuum required.

To see the work involved in a) discovering all this, and b) putting it right, you only have to look back at some of the highs and lows in this blog.

Lots still to do before MOT time... But tonight, we celebrate. 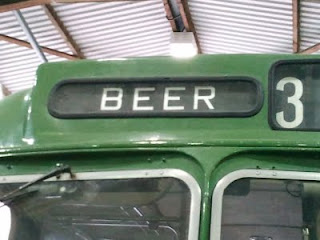