One more day, then.

You know the bit at the end of what seems like most Bond films, where our hero works to the very last second to disarm some kind of nuclear bomb?

I know that feeling. If 270 KTA isn't ready by Tuesday morning at 9 o'clock, MOT tester Dave Guscott probably will explode. All over North Devon.

When I phoned him in the week to say that we were "nearly ready again", he resisted a jibe and just chuckled. He's heard that many times before...

But we are nearly ready, except for a huge 'To Do' list of mercifully small jobs through which I'll be ploughing tomorrow - my last working day if I'm to disarm the bomb.

Today has been productive.

I've solved a problem with the reversing light, which (you may have spotted in previous photos) was shining all the time. Before I had it  the bulb had been taken out, presumably to hide this fact from the MOT men. The original fault must have been so for years: it turns out the bolt which operates the switch was too long, therefore pushing the contacts together even when the bus was in neutral.

Maybe this is why we've been going backwards a lot of late?

I've also properly secured the front number plate, which was previously hanging on by just two rotten bolts. Another little job I've been meaning to do for months...

Tomorrow will be a long day. I'm planning an early start, and I expect I'll still be going when it gets dark.

Or perhaps tomorrow night I'll be winding down to a hiatus on a private yacht somewhere, evading calls from my superiors while I make love to a Martini?

More likely under the SU hiding from Guscott... 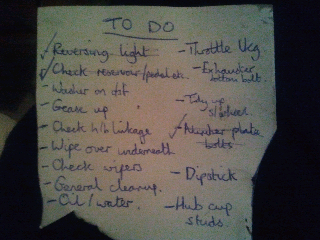