Today has been a milestone day for our mutual friend: 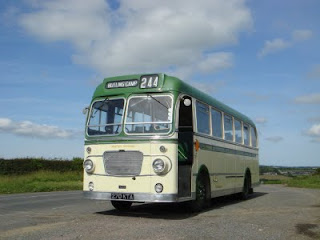 I'll bring you some meaningful context when I've had some sleep, but for now, here's how the big day went...

0758 - Arrive Sourton Services, having managed not to boil up on the notorious Haldon Hill. Driver realises he's carrying only 86p in cash, so writes off ambitions of a bacon sandwich and instead pursues tea. 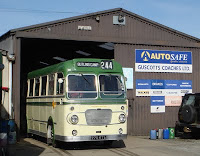 0910 - Dave's helper rips his trousers (and skin) on the runners underneath 270 KTA's driver's seat. I hide the corresponding rip in my own trousers in the hope this is not seen as a safety issue...

1016 - Return journey is halted by a man waving his arms in the middle of the road. He tells of a serious accident ahead on the A386 Tavistock road, the one I need. Decide to divert via Bridestowe - looks like a big road on google maps...

1135 - Two women at a bus stop in Tavistock flag me down, retracting their hands and shaking their heads at the last minute. Maybe it's because Bristol SUs haven't run in Tavistock for 35 years; or maybe they decided they didn't want the bus that goes to "Butlins Camp"... (I mean, it's not the school holidays yet, is it?)

1230 - Arrive BBC Plymouth, where I must begin a day's work while 270 KTA waits patiently in the seven private spaces coned off in anticipation of success. Among the spectators is my boss, who later sits in the cab and manages to break the engine stop cable. (Don't mention he's not the first... I might get a pay rise.)

1906 - Driver checks oil and water, mends the engine stop cable and performs a tight 180 degree turn in the car park.

Our friend is back on the road. 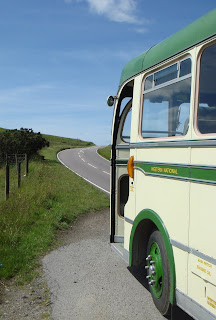