- noun
2. The derivation of pleasure as a result of ... watching pain inflicted on others.

I’m delighted that 270 KTA’s blog is proving to be of service. A quick glance at the stats reveals that, every month, some 500 regulars return to this site to enjoy the latest terror inflicted by our friend. Bravo, I say. One objective of this blog is to showcase all aspects of preserving an old vehicle to anybody who’s interested, shiny and less so, and it would appear there’s an appetite for it. 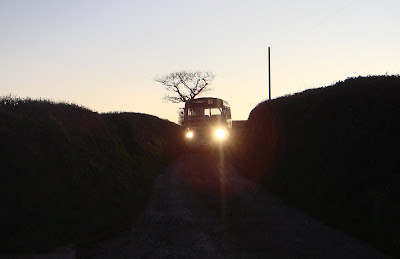 This weekend’s tale will definitely feed the sadist. Having arrived at 270 KTA-HQ intent on removing injector pipes (spare ones to be made), today’s first job was to move 270 KTA to a space where she could be left immobilised for a week.

Ironic, given the state of the batteries… 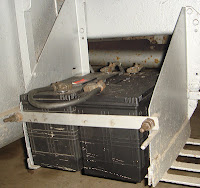 Now, it’s not unusual for an infrequently used vehicle to have flat batteries, especially in the Winter, but our friend has history. Since I’ve had it, we’ve had no fewer than four battery disasters; I also have a friend who remembers the endlessly immobile 270 KTA clogging up Bridgwater depot in the early ‘70s because “she’d go through whatever batteries they put on”. Reason tells me there can’t be anything to that, and even if there was at the time, surely it wouldn’t still be doing it 40 years later?

And yet, they were doing their bit for pancake day. A dead cell was identified.

To spare you the hours of fruitless charging that, sadly, I wasn’t spared myself… we now have new ones. An expensive return trip to Plymouth and back in the car, and the problem was sorted.

But as we know, out of pain comes pleasure. A celebratory drive into Kingsbridge in glorious early-evening sunshine made everything okay. 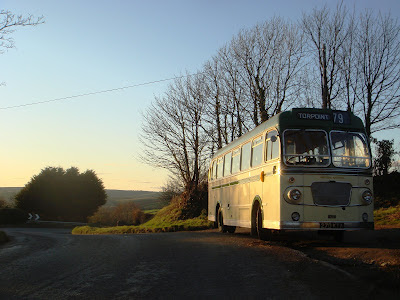 Even if I didn’t get to touch an injector pipe today.

Since I announced plans for the 50th Anniversary tour last week, several of you have been in touch to arrange meetings en route. Our friend looks forward to seeing her followers – human and canine - in Weymouth, Taunton and Bridgwater so far, and would welcome more. Drop me a line to let me know you’re ‘out there'...
Posted by David Sheppard at 14:42