Next week sees the 50th anniversary of 270 KTA's delivery to Western National from the ECW factory in Lowestoft. 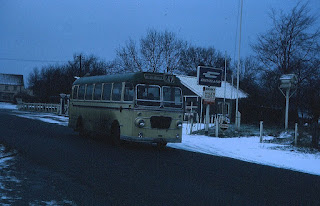 Essentially, it's our friend's 50th Birthday (although you'll remember from this post that births take a bit longer when you're a bus). To mark it, we'll be embarking on a very informal four-day tour.

The mission is to visit the site of every depot from which 270 KTA worked during her time with Western National and Devon General. Along the way we'll recreate some of the many photos I have from those locations and out on routes.

It's still a work in progress, but here's the ambition...


All being well, it'll be a fitting way to mark our friend's actual Golden Jubilee in what I promised would be a year of constant celebration - so it has proved so far.

And, of course, celebrations will continue on June 29-July 1st when both 270 KTA (first registered July 1st 1962) and 275 KTA ('born' a few weeks later on July 11th 1962!) will together be taking part in the Royal Blue Run, driven by David Sheppard Junior and David Sheppard Senior respectively - and perhaps the other way round on the odd leg.

The photo is courtesy of Stuart, and is one that I plan to recreate next week. It has also sparked some speculation about 270 KTA's recorded history - the scandal to which I hinted in the last post - on account of the date it was taken. (That matter deserves a post of its own, really, so I'll save it._

* Also, our route takes us close to the GWR's Limpley Stoke - Camerton branch line, the location of filming for the "The Titfield Thunderbolt" exactly 60 years ago in June 1952. It seems opportune to photograph 270 KTA at some of the locations, including the depot where "Pearce & Crump's" Bedford OB lived in the film, now a housing estate... Indulgent? Yes!