Unlike a career in radio, owning a bus means you get recognised.

How lovely to meet so many people at Sunday’s Plymouth Hoe rally who knew all about 270 KTA’s exploits as soon as they saw her.

“Got any springs, David?”, came a shout as I parked up.

“I found these and thought of you” said another, pressing some photographs of SUs into my hand. Brilliant.

“Good to see she made it -- this time” came another cry. Bloody cheek. 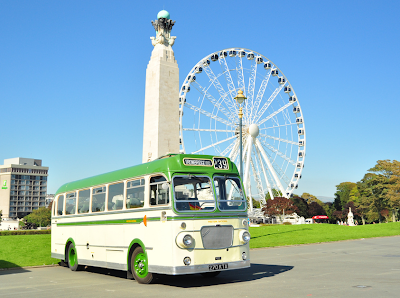 When I started writing the blog two years ago, it was my intention to share all the bits of bus preservation which are normally hidden behind barn doors, where things tend to look very different to the scenes we enjoyed on the Hoe on Sunday. Little did I think that over 12,000 people would find it a thing of interest, many of them making it a regular place to visit…

I only hope that our run of recent successes (Sunday included) won’t discourage those who enjoy the more sadistic element of reading the blog. Rest assured, there’s much potential for late night despair and jeopardy in the next few weeks as I try to renew the studs in 270 KTA’s nearside rear hub.

All the studs have been replaced with bolts of various sizes over the years, and all are working themselves loose with use. It’s going to be a horrible job, with each stud needing to be specially machined down to size; plus, it’s going to need to be done against the clock if we’re to make our next appointment in the rally calendar, published here in a moment of foolhardiness a few months ago.

Speaking of the calendar, I’m pleased to add to it the Warminster Running Day on October 7th, when 270 KTA will be retracing her 1968 steps on some of Western National’s Wiltshire routes. It’ll be a fitting close to the rally season in her 50th year, and great to meet again some of the new friends we made on her Birthday tour.

See you there too? You're sure to recognise one of us... 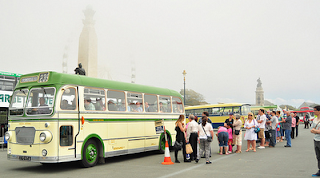 Photographs courtesy of Laurence Mayhew - very nice they are, too.
Posted by David Sheppard at 10:58 No comments:

Our more forensic readers will have noticed an inconsistency in the blog since it started: sometimes 270 KTA is described as a bus, and sometimes as a coach.

For the uninitiated, there is a difference. Buses are designed for short journeys, and are generally less opulent than their long-distance coaching cousins which are purpose built with passenger comfort as a priority. The difference between an SU bus and an SU coach is marked. Our friend is really a coach, built with a high floor and posh seats, but was later modified to make her suitable as a ‘dual-purpose’ vehicle – she could be used as either a bus or a coach as the occasion called.

So the inconsistency can be excused.

But this weekend, 270 KTA was definitely a coach. 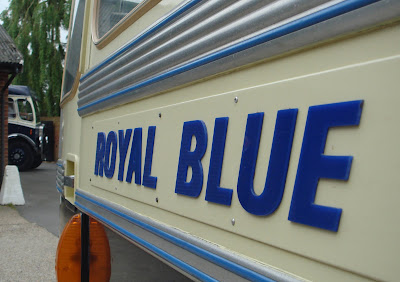 The annual Royal Blue coach run has become one of the highlights of my year. For people like me who never got to enjoy the halcyon days of coach travel, recreating the old coaching routes with preserved vehicles is the nearest I’ll get…

We avoid the by-passes and the motorways and stick to the old roads, some of them long forgotten. We drive into the tiny villages long neglected by public transport, and as I mentioned in my last post, we collect hundreds of waves along the way.

Friday’s leg of the run was from High Wycombe to Exeter, via Reading, Salisbury and Honiton; given the mileage up-country, I decided against bringing our friend along for this bit, instead travelling down on brother 275 KTA (a long-established member of the wider Sheppard fleet – and always a coach, having never been converted to dual-purpose).

Indeed, between Salisbury and Exeter I drove him for the first time. He’s a little more refined than our friend, but then we’ve had him for a long time. Very nice indeed. 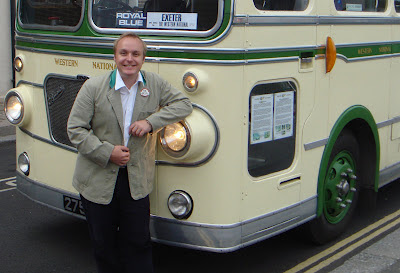 Some suggested I’d better wash my clothes before Saturday, when 270 KTA would smell the scent of another SU on me. As it happens, they’re actually good friends (as witnessed by their beaming smiles whenever they’re together), and a reunion on Saturday morning would turn out to be a wonderful occasion for us all. 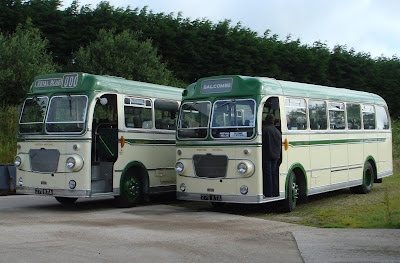 Indeed, a far cry from when I first saw them together in 1996… 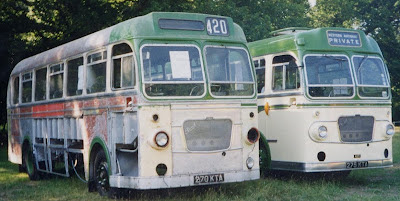 Saturday’s journey took us from Exeter coach station (an old haunt for both), along the coast through Dawlish and Teignmouth, towards Torquay and Paignton, Dartmouth and Kingsbridge, and finally Salcombe. 270 KTA proved to be a little slower than 275 KTA on the hills, but they held their own against the much larger Royal Blue coaches they would have worked behind as duplicates in the 1960s.

Colin and Helen Billington threw a fantastic party on Saturday night to celebrate having owned their Royal Blue Bristol LL coach for 40 years (see – it’s not just me who marks these things), and it was one of those brilliant occasions when like-minded people come together to have a great time. I think the coaches enjoyed themselves, too.

Speaking of occasions, Sunday marked fifty years since 270 KTA was first registered with the DVLA. It’s a less notable ‘birthday’ than the one we celebrated the week before last (that of her delivery from the factory), but how brilliant that she should spend the road on a long distance journey from Plymouth to Bath, via Bodmin, Okehampton, Exeter, Glastonbury and Wells. 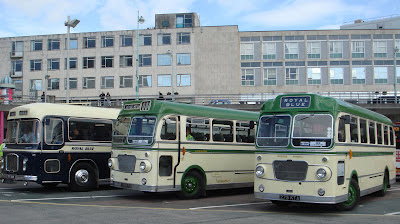 I won’t give more than a brief mention to what happened on the immediate approach to Plymouth; we’ve heard enough about throttle springs breaking already, and it would be as much of an annoyance to revisit that on the blog as it was at the roadside… so that never happened. Alright?

(Okay it did – but I have some new springs on order, so it won’t happen again for a very long time…) 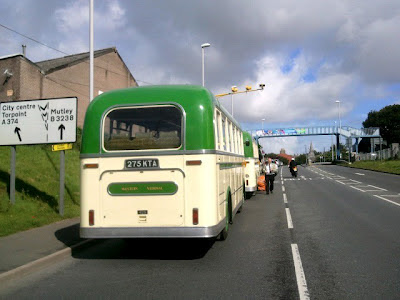 Otherwise, both SULs performed faultlessly, as did all the seventeen coaches. Those who set out for Bath made it, and as far as I know, all made it home again. 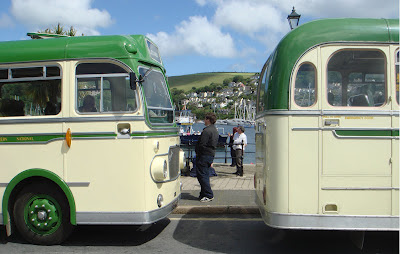 With the best part of 1,000 miles under our belt in the past fortnight, I’m beginning to feel much more confident in 270 KTA’s readiness for longer runs. That in itself is a great achievement.

As ever, there’s much to do before our next outing. The nearside hub is beginning to leak a little (a result of a bodge by previous owners, in which half-shaft studs were replaced with bolts – I have a plan to reverse that).

Plus, I do need to finish fixing that door, which is currently wedged shut during journeys with a plastic bucket. Perhaps a little more bus than coach in that respect…

With thanks to Peter Delaney and Peter Murnaghan for the on the road shots.
Posted by David Sheppard at 02:58 No comments: