The postman brought good news for our friend today...

Warminster Running Day, a week on Sunday, will see 270 KTA back in service on two of the routes she worked between 1968-70.

The 242 - between Warminster and Westbury - and the 247 - between Westbury and Frome - would have been staple routes during her time at Trowbridge depot.

As with Kingsbridge, it's especially magical to ride on a vehicle knowing you're recreating history with uncanny precision. So come along and see us.

To tempt you, here we are at Dilton Marsh, recreating part of the 247 on 270 KTA's 50th Birthday Tour in June. I suspected then we might be back soon...

Posted by David Sheppard at 16:28 No comments: 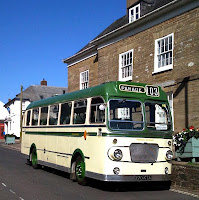 Can you believe it’s twelve months since we were chased up the road by a lady on a broomstick?

Yes, it's 52 weeks since we had to limp back from South Pool with a broken injector pipe and a full-load of passengers, spilling fuel over the road as we went… 365 days since we had to perform a 9-point turn in East Prawle when Sheppard mis-read his instructions...

This year’s Kingsbridge Bus Running Day was slightly less dramatic for our friend, but equally enjoyable – if not moreso for her long suffering owner-driver.


Here's our friend, reunited by chance with Brian and Ron, who proudly claim to be the last two ex.Kingsbridge drivers still with us. Between them they drove most of the vehicles at Kingsbridge in the 50s and 60s, before being made redundant when the depot closed in 1971. Both still local men, they turned out for the running day and wandered up to the old depot building, only to find their old coach lurking round the side... 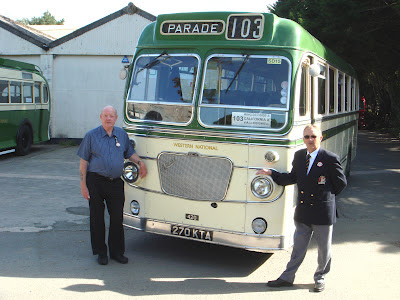 Brian and Ron both remember 270 KTA with remarkable clarity. They drove her on Dartmoor tours, Royal Blue duplicates, the lot. They remember her being sent away from Kingsbridge in 1968, and not getting her back. It was incredible to hear.

This is why bus rallies are good, but Running Days are better. The vehicles are back in their own environment, doing what they used to do, summoning up long-forgotten memories for those who were there first time around, and passing them on to those who weren't. I lapped up every word. 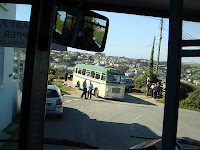 Brian told me about the day a new state-of-the-art diesel pump was installed on the forecourt at Kingsbridge; and then about the following day, when he took it out with the side of a bus and got himself suspended for two days. Ron told me about the time he got an SUS stuck on a hill on the East Portlemouth route because the farmer's cows had "made the road slippery".

They spoke about these things as if they'd happened yesterday, and looked at me in horror when I mentioned that 270 KTA had just celebrated her 50th Birthday. So yes, time does fly.

Especially when you're having fun. 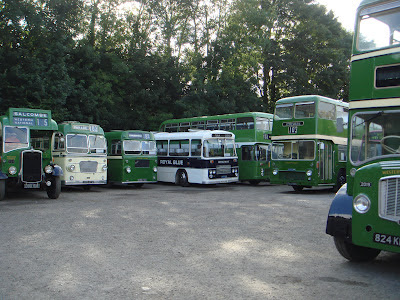 Posted by David Sheppard at 14:04 No comments:

Twas the night before Christmas...

Not quite, but just as magical. Here's our friend outside her former depot on Friday night, having completed a route learning tour to East Portlemouth. 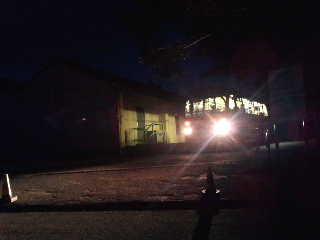 Posted by David Sheppard at 15:49 No comments: