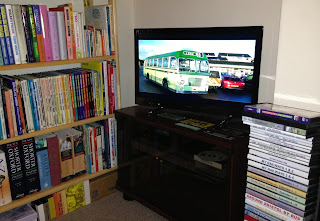 If you haven't yet met 270 KTA in person, may I recommend the next best thing to tide you over until gearbox repairs are finished?

Robin from RT Realfilms handed over a DVD at the weekend. He's captured every aspect of our recent adventures in Looe when, you'll recall, we ran alongside the Great Western Steam Railmotor on the picturesque Cornish branch line.

Together with Colin Billington's Bristol H, we're shown 'racing' the train between Liskeard in wonderful scenes not unlike The Titfield Thunderbolt in spirit. Of course, it wasn't a race - the route via St Keyne and Duloe is a hilly one for both road and rail - but it's amazing how sprightly things look in the edit.

For those with even the mildest interest in old trains and buses, it's the perfect Winter antidote: the Cornish countryside basking in Autumn sunshine, with steam and Tilling green - you'll feel warm after just a few seconds...

And for Railmotor fans, it will be in action again this weekend on the South Devon Railway, with bus fun provided by TV&GWOT in the shape of Bristol H 137 and (in 270 KTA's absence) Bristol LWL 1613, the latter in the charge of Driver Sheppard.
Posted by David Sheppard at 16:15