I hope you'll forgive the brief blogger's silence. An impending house move has dominated the last few weeks, although 270 KTA has, as you'll see, provided more than sufficient distraction to keep me sane...

An update on a few things:

Firstly, our gearbox toils appear to have been both successful and worthwhile. There's been nothing to give concern over several short tests, in fact, only encouragement; it's almost worth pickling this moment. 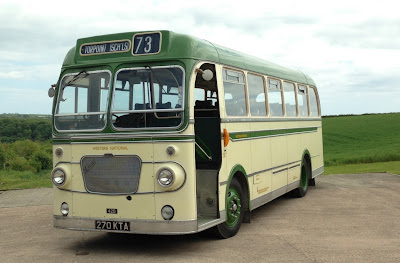 Nasty noises and whines have gone and, for the driver, the gear change is improved beyond recognition thanks to the renewed linkage. Where the lever had moved several inches before, it now moves millimetres. The pudding can no longer be stirred from the cab.

(That's Jaguar Universal Joints for you...)

So we're back in business. 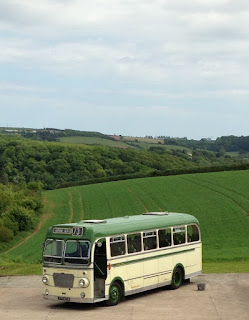 That said, given the work we've just done has only been tested locally, I didn't feel it would be comfortable to attempt this year's Royal Blue Coach Run (London to Margate, Brighton, Portsmouth, Salisbury and Cheltenham - roughly 1000 miles when undertaken from Devon). Instead, our friend will sit this one out until a few more journeys have been accomplished, and brother 275 KTA will make polite excuses for his friend.

270 KTA's next mission will be MOT renewal in the next few weeks, for which I'll finally need to repair the electric door, given new regulations. Thereafter, BBC Radio Devon's vintage vehicle rally looms on July 14th (trails are running on air as we speak, featuring the engine sounds of an SU stunt-double ), followed by the Plymouth Hoe rally the following week.

Then, all being well, a more intensive calendar begins.

Another development of the last few weeks is that 270 KTA is set to feature in a forthcoming book by Nigel Furness, in which Bristol vehicles are appraised by their owners. As you might expect, I've given the SU as honest an appraisal as you get on this blog; it's ultimately an infuriating and yet totally endearing design in equal measure, depending on how the day has gone. Expect to hear more about that soon.

And speaking of press calls, Ken Jones' newly delivered model of 270 KTA has received rave reviews in the N-Gauge Journal.

Being new to SU ownership, Ken is much more cavalier than I am about the prospect of on-the-road failure, and he reports that he will be taking it on the Royal Blue Run in a week or so's time.

I look forward to updating you on its progress...