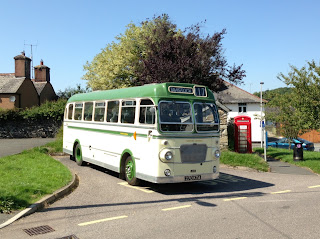 This week saw 270 KTA's third victorious journey for MOT testing, a little later than usual due to major domestic upheaval (a house move that turned out to be more like relocating a transport museum).

To refresh your memory, since our last foray there's been major work to rebuild the gearbox, clutch and gear linkage amongst other things.

And on Thursday, in the words of MOT tester Dave Guscott, "it all worked".

MOT day is always like a trip to the dentist, however confident you may be in your own vehicle. Having someone as experienced and straight talking as Mr Guscott prodding around your handiwork makes for a tense hour while you await the verdict. In typical style, 270 KTA usually smirks through the whole ordeal like a naughty schoolboy while yours truly awaits the parents' night report with dread... 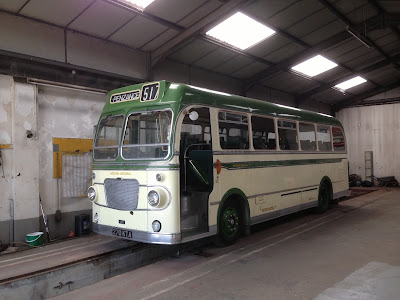 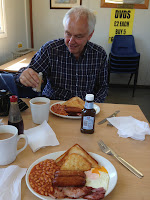 Naturally, the relief of a pass must be celebrated, and the traditional way is with an afternoon of relaxation at the Sourton Services Health Spa. Sadly this year, as in all previous years, they were clean out of dried papaya and mango nut museli, so instead we had to go for something from the specials board...

Colin, too, was celebrating the pass of his Bristol LHS which travelled in convoy. (Bus enthusiasts will ask, shouldn't it be a smaller breakfast for an LHS?)

Another growing tradition of MOT day is the eventful journey to and from the test centre, for us, a 160 mile round trip. Not to mention the first year - when it soon became apparent that my new acquisition should not have been on the road with those brakes - 270 KTA has so far given us flying windscreen wipers in a monsoon, boiling water during a major drugs raid, an unexpected diversion via a farm track, and now this year: the lorry, the split trousers and Darth Vader.

(To cut that story very short for time and decency, whilst trying to help a lorry driver pass the coach on a narrow Devon lane, I bent over and catastrophically split the gusset of my trousers in front of a long line of cars and, for reasons unknown... a man in Darth Vader costume. Clear now?)

The journey home was in glorious sunshine, and gave an opportunity for some photographs around the many local SU haunts, including Tavistock Bus Station, where 273 KTA was so often found to be lurking in the '60s...

And so begins a very late start to the rally season for 270 KTA. Provided I can find some new trousers, we'll next be in action at TV&GWOT's annual Kingsbridge Running Day on September 21st, one of five SUs expected to attend - to my knowledge, a record for any rally in recent memory. We also have the splendid Warminster Running Day on October 13th, for whom 270 KTA has been this year's poster pin-up. I'm not sure how I feel about other men leering over her bodywork, but if they knew what a handful she was...

Plus there may be one or two other assignments in the interim. Watch closely as regular updates resume. 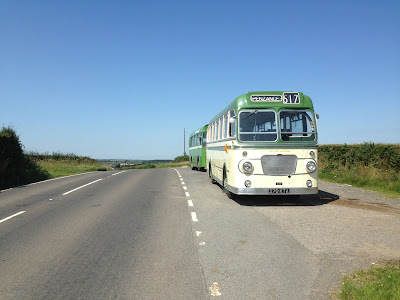 Posted by David Sheppard at 16:05 No comments: