50 years ago this weekend, the final train ran to Kingsbridge - home of 270 KTA, both then and now. 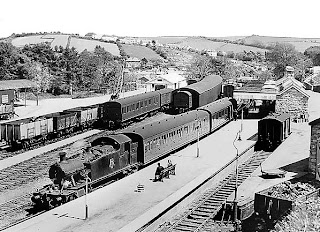 It was a sad but not entirely sombre occasion. Locals 'borrowed' the restaurant car from The Cornishman and had it marshalled into the branch line train for the occasion. The bar was dry of whiskey by Avonwick - first stop from the main-line junction at Brent - and the merry passengers had to move along the top shelf for alternative refreshment during the long, twelve mile journey to Kingsbridge.

This weekend TV&GWOT will be marking the anniversary with a bus trip from Kingsbridge to Brent, passing as much of the trackbed as we can, and stopping at all the former stations along the route for a look around. (With the exception of the two termini, they're all still there and restored as private houses.)

We'll be using 270 KTA, along with Colin Billington's Bristol H - a fellow South Hams vehicle - and the more off-route 'Taunton Shuttle' Ford Transit, which is suited to some of the tougher terrain.

I would invite you to join us, but a small feature in the local paper has returned an enormous response from locals and all three buses will be full. But you'll get some photographs here.

Instead raise a glass, or a whole restaurant car, on Sunday...