One for the Animals

Ken Jones's dog, an avid reader of this blog, writes...

"Do I have to step in to write an update for 270 KTA, whose blog has not been updated since October? I want to dispel immediately that young David has another love in his life and is up to some hanky panky."

You're quite right, Doggy. I've been very remiss this past month, and it's not due to hanky panky. I haven't had time for that either. Today is, in fact, my first full day at home in 36 weeks, and even that's been enforced. This has been one heck of a busy year.

Here's what's kept our friend busy in the last month or two...

The annual Warminster Running Day was a triumph, if near-apocalyptic in terms of weather. Our now customary schedule of 242's to Westbury and 247's to Frome (both routes were operated by 270 KTA in the late 1960s) was supplemented by a trip to Longbridge Deverill in such driving rain I could hardly see the road. Funny how full loads always turn up for those occasions, if only to create more steam on the windows... 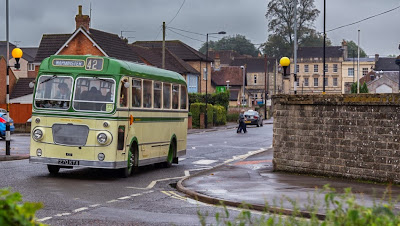 We also paid a visit to Warminster Barracks, on the outskirts of the famous lost village of Imber, where passengers dutifully obeyed instructions not to take photographs... 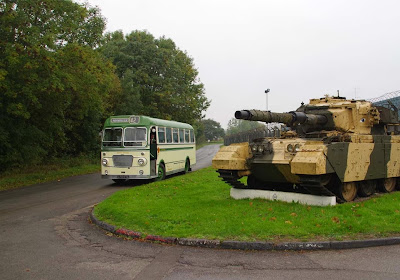 ... of anything except the coach and the tank.

I often forget how, in a short space of time, our friend has progressed from a dead vehicle to one I'll happily take on a 200 mile mission such as this without huge concern for how I'll get back.

Which just goes to show how silly I am.

Our next outing was preceded by yet more battery problems, a characteristic flaw of 270 KTA since birth if the stories are to be believed. To cut a long story short, he specialises in dead cells, and we're now on our third set in four years. I've finally bought some decent ones, so we'll see how long they last. 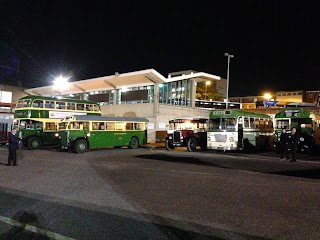 The Exeter Twilight Running Event was nothing short of magical, with nocturnal operations based on the bus station in Exeter and covering a range of Corporation and Devon General routes.

With 'red' heritage, 270 KTA was a welcome visitor and carried good loads on some of the tightest routes Exeter has to offer.

After a search of nearly four years, we're beginning to haul in some original-style wheels. Several are now owned, but this was the first to be remanded in custody. Kindly donated by fellow SU owners Terry Partridge and Terry Bennett, in exchange for a later-style wheel, the ceremonial handover was at Winkleigh in October. 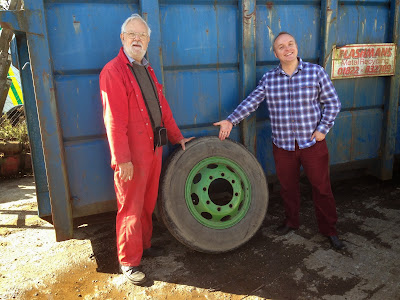 When you're cursed with an eye for details such as these, only a right'un will do! This, and others, will be cleaned up and fitted over the Winter months. 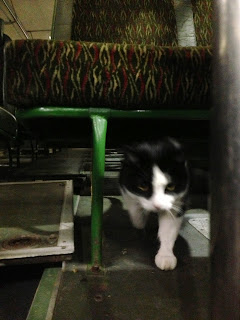 And one final, sad development...

It's with great sadness I must report the demise of Partridge the farm cat, one of the least active and yet most supportive followers of 270 KTA's exploits, who passed away this week after a short illness.

Without his regular inspections, I might well have met a few more deadlines instead of charging around the shed to rescue him from underneath buses or heave him down from high ledges. Certainly, I would have eaten more of my own sandwiches. But without his company I'd have had some lonely winters and all at 270 KTA headquarters would have missed out on some of their best laughs.

It's not an overstatement to say that life will be transformed without him. 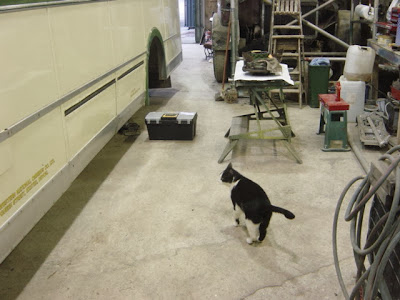