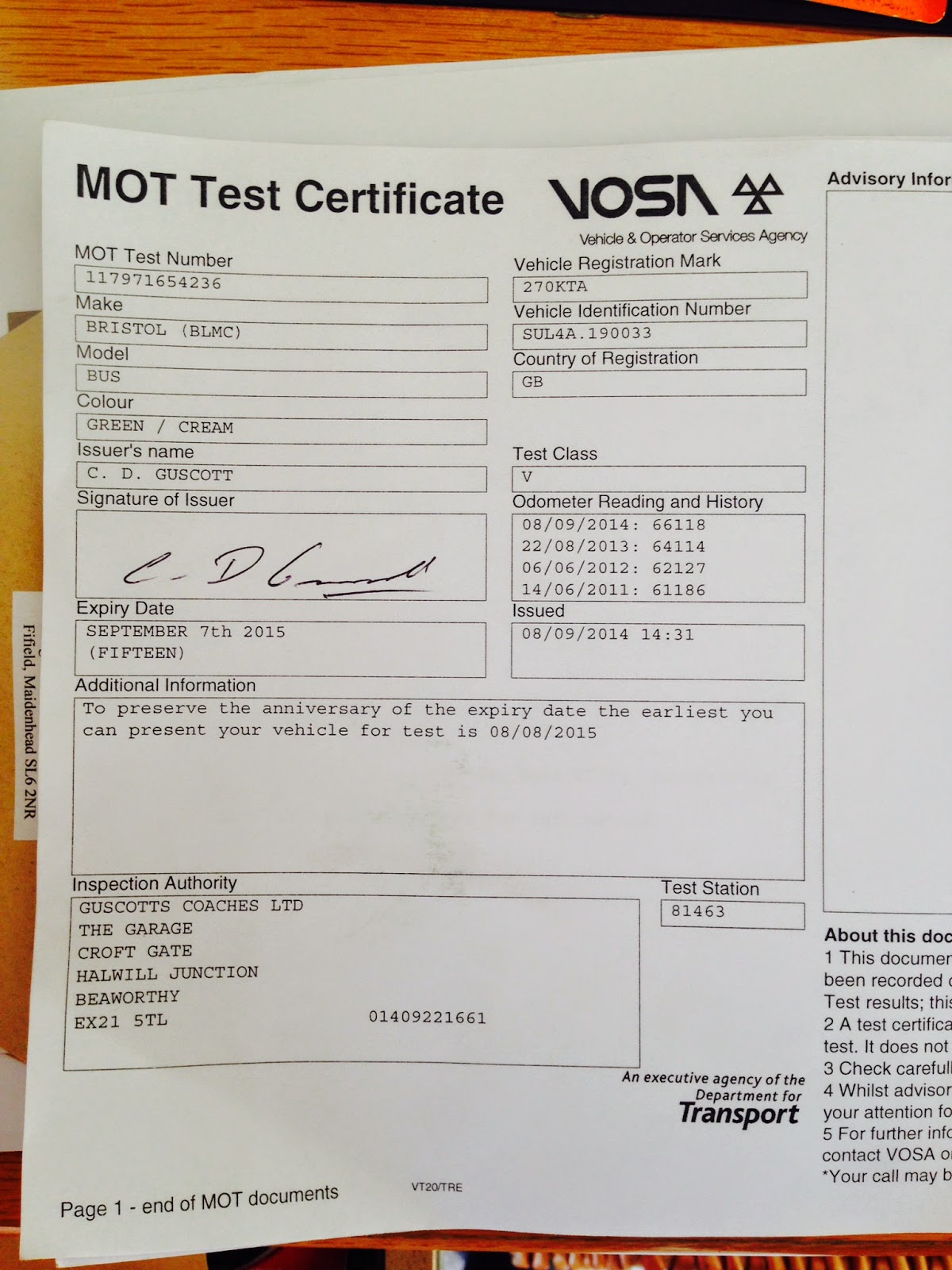 Nowadays, I'm almost starting to take these for granted...

Five years on from when our friend first barged into my world - bringing chaos like this, and this, and this, and especially this - it could be easy to forget the work that has brought us to a situation where the great Dave Guscott not only issues an MOT certificate without advisories, but also ends his inspection with a compliment: "It's in lovely condition these days".

Fortunately, I'm too much of a worrier to become complacent. Yet, there's been so much going on at 270 KTA HQ these last few months, there's been next to no time even to worry, let alone to reflect on our achievements. 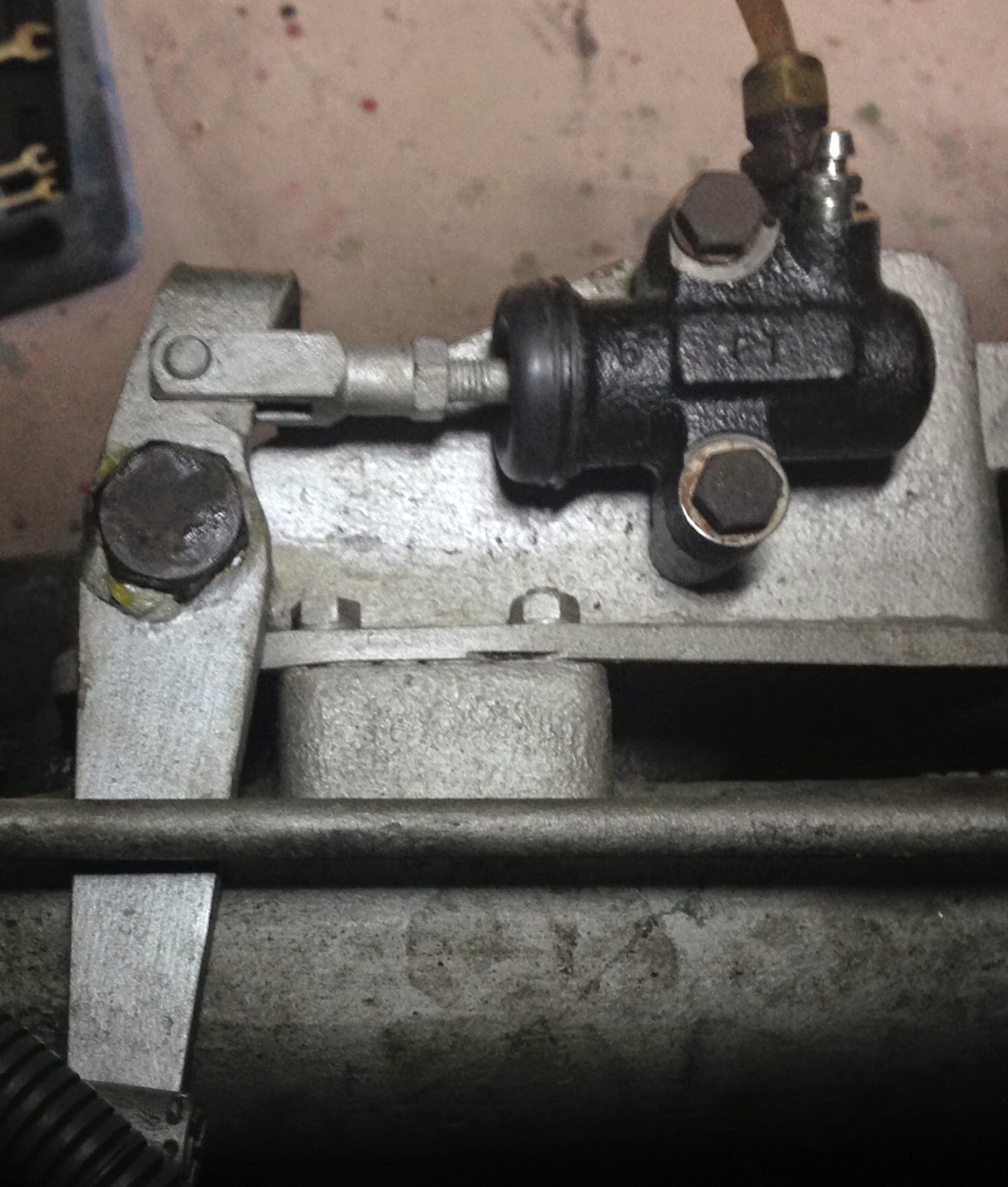 So let's do the latter now.

Since the phoenix-like return of 270 KTA's throttle in time for the Exeter Bus Station 50th Anniversary, our friend has been enjoying himself, and helping others to do the same. (I did replace the slave cylinder in the end, along with the infamous throttle release spring [again, easy to forget trauma], to great benefit as far as the throttle is concerned.)

Firstly, a smashing day was spent with Terry Bennett and his Bristol LH, Devon General 88, recreating some of the routes that 270 KTA would have trodden during its time with DG at Newton Abbot. This is a period in our friend's history which, because of my allegiance to its 'green' days, I'm often accused of under celebrating. So a gang of interested parties was assembled, and celebrate we did - appropriately, 40 years to the month since 270 KTA was downgraded by Newton Abbot depot from 'dual-purpose' to 'bus' configuration. 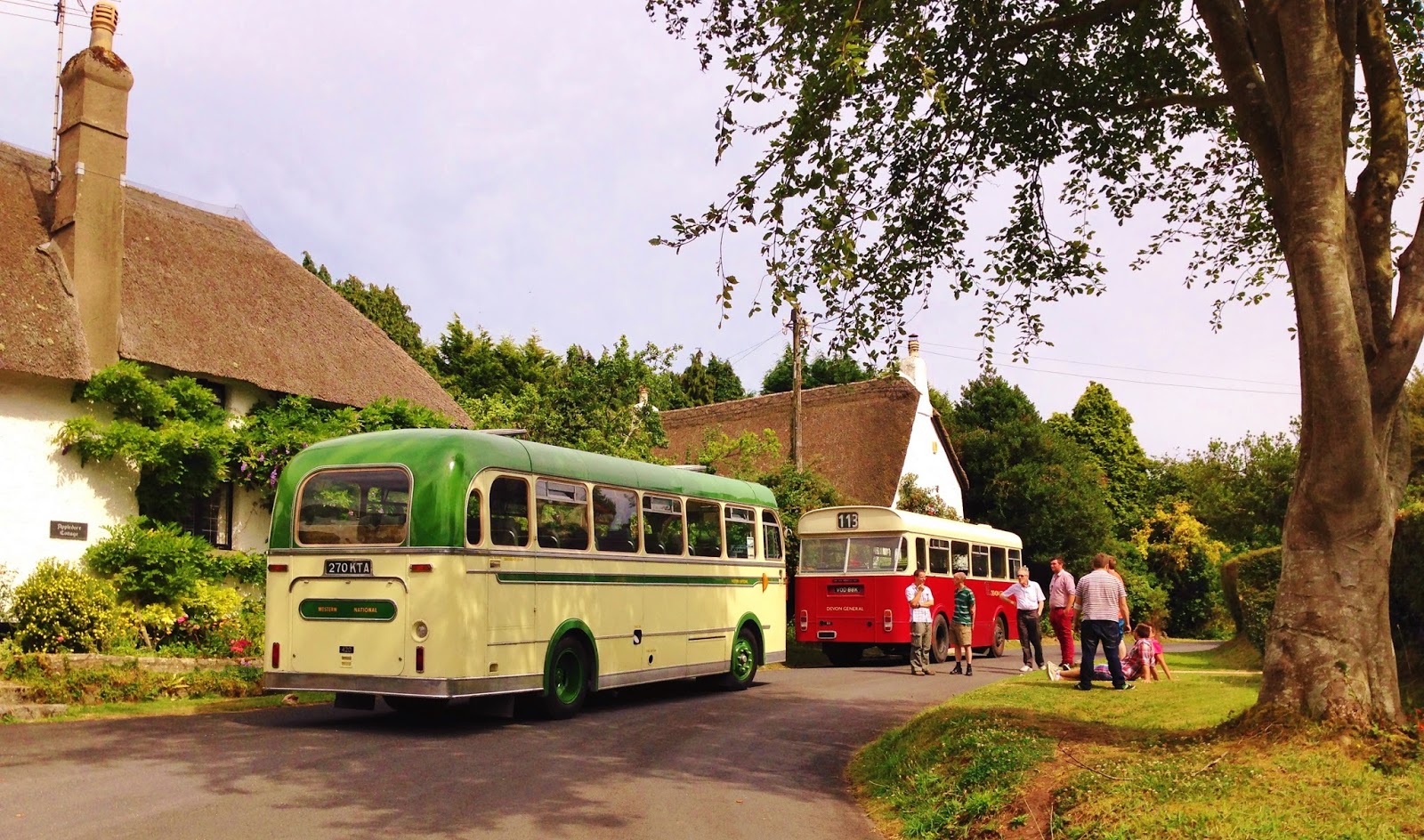 We sampled routes to Teignmouth via Combeinteignhead, Haytor and Ashburton, and delightful Coffinswell, and the territory is enchanting. Whilst I'm definitely not (repeat: "NOT") about to get out the poppy red paint, I am very pleased that 270 KTA has some unique Devon General heritage, and will celebrate this more often in future. 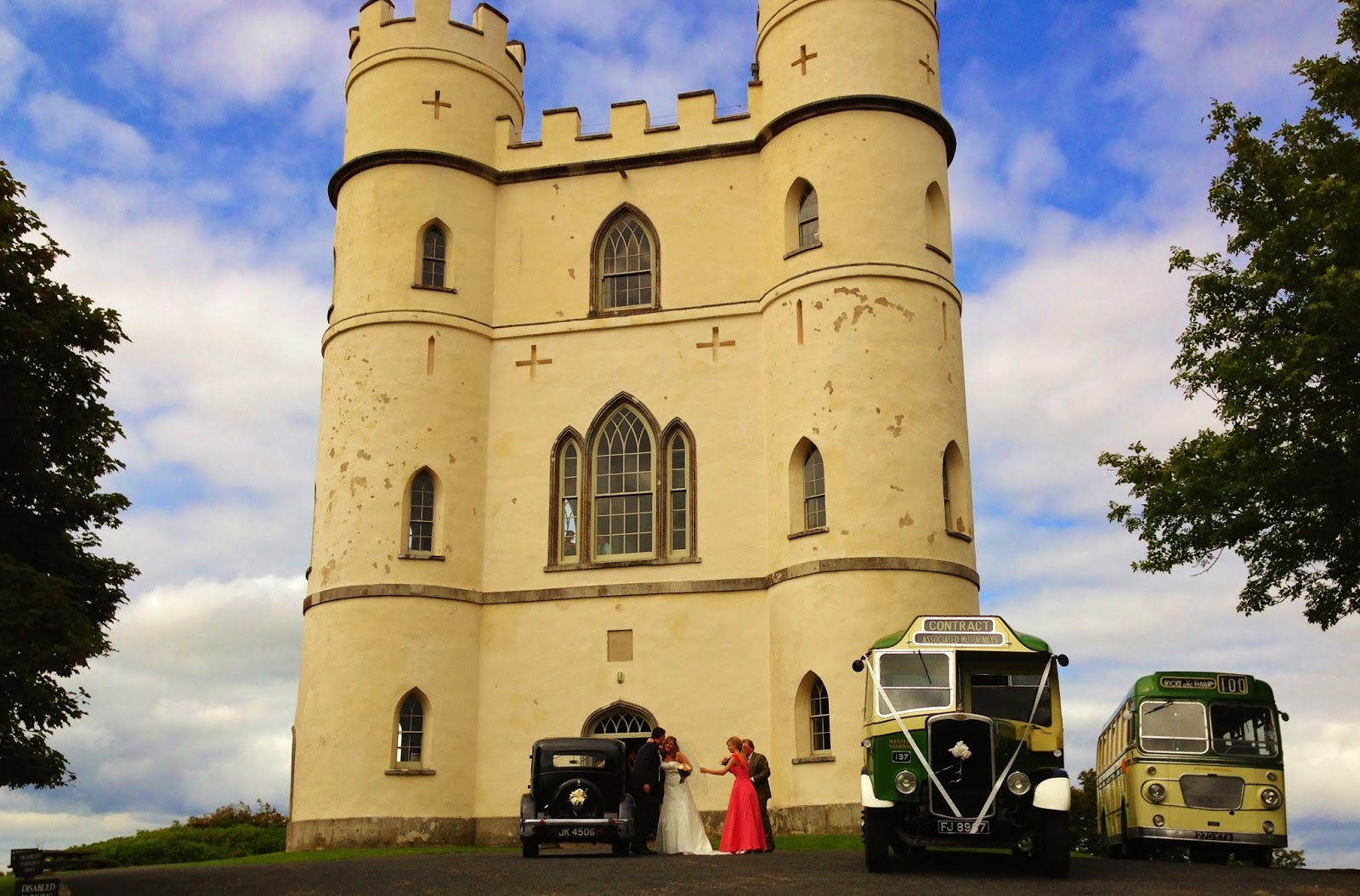 Our next adventure featured a castle on top of a very prolonged hill. The wedding of a South Devon Railway friend gave a good excuse for a trip across the edge of Dartmoor to Haldon Belvedere, in the company of Colin Billington's Bristol H, and Alasdair Page's 1930s Rover car. Here, the bride enjoys her final moments of freedom, as we prepare to enjoy a period picnic in the beautiful surroundings of Lawrence Castle. 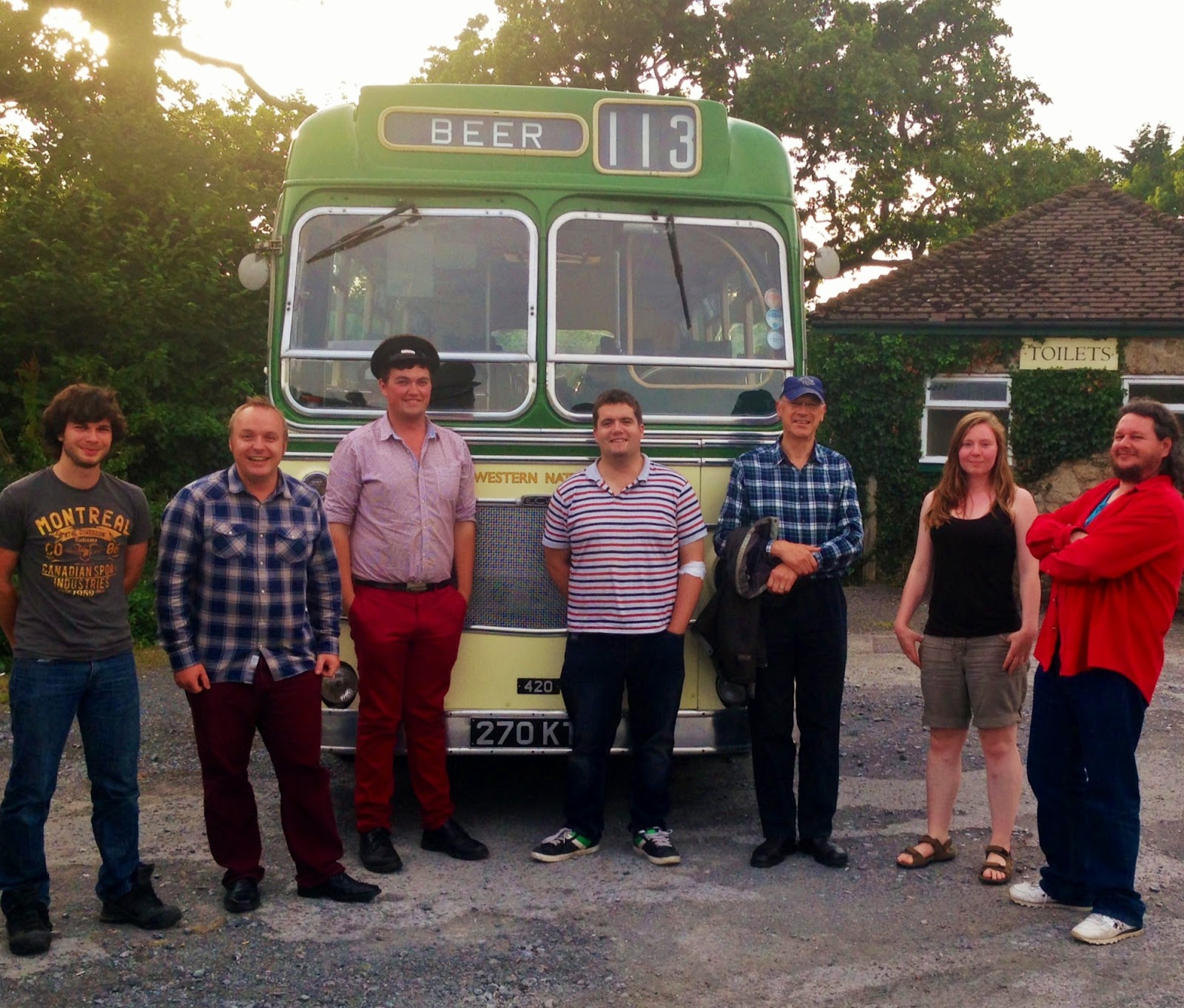 Alongside our annual 120-mile round trip for an MOT (a success as previously indicated), there have been a couple of trips to for dinner with friends. In fact, 270 KTA has become a regular at The Dartmoor Lodge in Ashburton; good job we have a suitable blind...

And, of course, last weekend was the annual highlight of 270 KTA's year, Kingsbridge Running Day - a return to original territory which is often as emotive as it is bold and adventurous. This year, I revived the old Kingsbridge tradition of attaching a bunch of fresh flowers to the bulkhead of its coach, evident in all known photos of 270 KTA in its early days.

The running day and subsequent trip to Dartmouth and Westpoint is already well chronicled on the Thames Valley & Great Western Omnibus Trust's Workshop Blog, so I'll leave you with a few shots of our friend's adventures that speak for themselves.

Another far cry from those early days - astonishingly, now well over 5,000 miles ago...