It May Be Winter Outside...

With the job of our traditional end of year review already done for 2015 by our most recent posts, I thought I'd offer instead some seasonal shots of Bristol SUL coaches which will make you feel warm inside (and cold outside).

What with 2015's mild Christmas, it's easy to forget that Winters were like this when our friend w're a lad.

Here, 270 KTA is seen battling the notorious Winter of 1963 on private hire work, thought to be nearing East Portlemouth. The driver, attired in full Winter overcoat and hat, was probably no gauge for the temperature of his passengers, but it's hard to imagine why the door has been left open in such freezing conditions; at least two of the hopper side-vents are also open! One can only assume that our friend's heating worked better in 1963 than today - or were the hoppers as hard to close then as they were when I bought it?

Here's a photo regular readers will recognise from earlier discussions, showing our friend during the Winter of 1969/70. It's one of several photos I have of 270 KTA battling snow in the Trowbridge area at the end of Western National's reign in this part of Wiltshire - or was it beyond? All records suggest the coach moved to Taunton from Jaunary 1 1970 - when Trowbridge operations passed to Bristol Omnibus Company - but some photographs, including this one, purport to be from 1970. Is it possible that 270 KTA stayed on briefly and unofficially with BOC? The presence of snow may hold the answer, but as yet, nobody has been able to tell me definitively when the snow came and went in Trowbridge in 1969/70....

Most likely during the same Winter, 423 (273 KTA) follows a sunlit path across snowy Dartmoor en-route to Tavistock. Snow is a regular feature of both Dartmoor and Exmoor, and we'll no doubt be recreating this scene - deliberately or otherwise - in the future.


Here's 275 KTA - fellow member of the Sheppard fleet - during a shunting manoeuvre in 2009. The snow fell quickly, leading to this delightful Christmas card scene which proves that an SU coach will stay happy and smile through even the harshest of conditions. 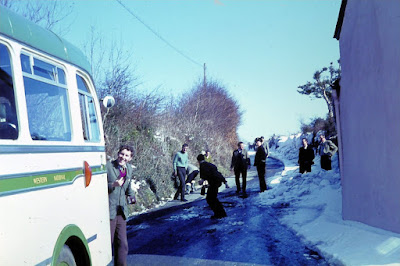 Finally, a uplifting Winter scene worthy of an Ealing Comedy. Here, passengers and crew of an Exmoor tour enjoy a snowball fight while their unfortunate SUL awaits rescue. It's likely this is the Winter of 1963/4; the coach is most likely to be 430 (280 KTA), then based at Minehead.

It's interesting and heartening that, today, our friend is a regular visitor to all the locations pictured here, though not often in these conditions. Perhaps Winters really were tougher in days gone by - or perhaps SULs are getting softer.

Seasons greetings to all our followers - here's to a Happy New Year and a 2016 full of adventure and success.
Posted by David Sheppard at 15:58 No comments: