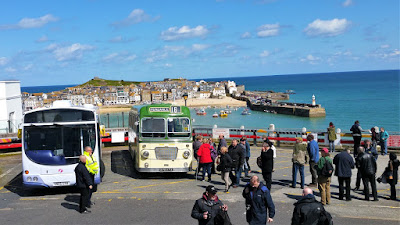 Given 270 KTA's track record with Penzance Running Days, it was brave of The Cornishman to include us in their preview of the event.

Regular readers of the blog will know (whereas readers of the paper hopefully won't) that our successful attendance is never without jeopardy. Loud noises and over-running gearbox rebuilds thwarted each of our earliest attempts to reach West Cornwall, to the point that I once thought we'd been jinxed by the famous Pirates.

Despite successful attendances in 2014 and 2015, an element of superstition remains at 270 KTA Headquarters and I never take for granted the success of the 200 mile round trip, or the free vintage bus services (over difficult terrain) we throw ourselves into if we're lucky enough to arrive.

Terrific, then, that we should be given the first run on a new route at the event: Number 13.

Fighting the stars, here is our friend at the Sancreed terminus of Service 13 last weekend, a really lovely route as it turns out. Along with two successful visits to Sancreed, we also ticked off the hilly 16 to St Ives (top photo), via Ludgvan and Halsetown, as well as our now-established duty to St Buryan - favoured by readers of The Cornishman. 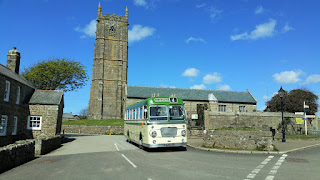 Despite the omens, 270 KTA performed almost faultlessly; a small matter with a broken spring on a brake light switch explains the irate man at St Buryan. And as noted by one passenger during the decent of Newlyn Hill, "Good job you did that brake adjuster!".

So there, despite pessimism, successfully began the 2016 season for our friend, another busy year full of delight... and probably still trepidation...