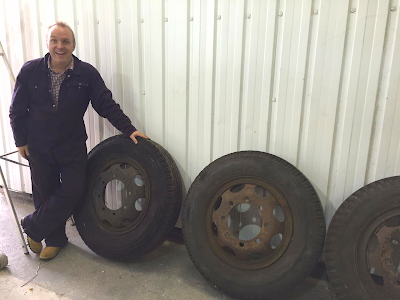 A seven year trawl of the country's farmyards, barns, workshops and scrapyards has finally yielded enough original-style wheels that 270 KTA and his brother will, at last, have a full set - at least where the eye can see.

I've advertised in magazines (of all kinds - even those), posted online, left notices on farm trailers and even rummaged in thorny undergrowth looking for these treasures. This original style wheel (Dunlop 22753, by the way) has a very distinctive look, much prettier to the eye of the wheel-purist than the later type which gradually replaced them as tyres were changed in service.

Had you not noticed?

An advert on Facebook recently brought FOUR from the marvellous Gary Cadwell, well-known lorry preservationist and all round helpful man. We owe him.

Others have come from donor vehicles and two from the equally marvellous Daniel Shears' forest at Winkleigh.

The bad news, of course, is that my requirement for correct wheels has doubled in recent times. 270 KTA's new brother is from the final batch of SULs to carry this style too, and five of its seven* have been replaced with strange ones. The better news is that the two remaining ones are in good enough shape for further use (i.e. round), taking our total to ten... which means both vehicles can now have correct wheels where they count. 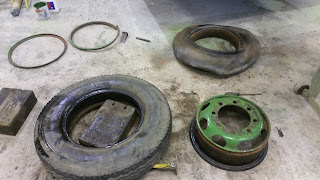 *Don't forget - buses have six wheels, not four, and in fact SULs have seven including a spare. So we're not entirely out of the woods yet; if you know where I can find more...

For now, back to the wire brush. 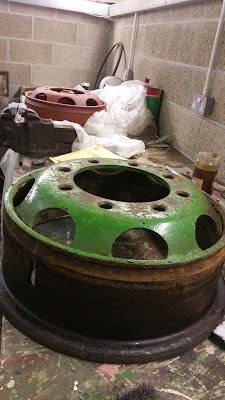 Posted by David Sheppard at 16:59 No comments: