Hasn't it been quiet around here lately?

There are two possible explanations. 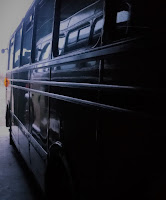 One is that the sleepy winter months have left me with nothing to report. Our friend has been locked away in a prison of darkness, peacefully awaiting warmer, happier times when the Albion sun will rise and the music will start again...

The other is that there's hardly been a moment to breathe, let alone write with a steady hand...

You know us well enough to be able to decide... 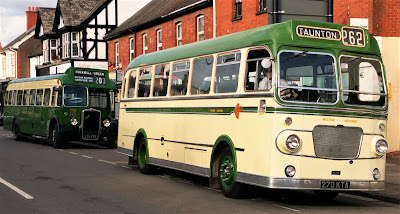 Since the start of the year, we've covered another 700 miles, attended five events, carried 500 passengers, ticked off a load of mechanical and cosmetic jobs from the eternal loo roll list... all whilst trying to make headway with the restoration of our friend's brother... (not to mention helping to get Conductor Farley's Bristol VR back on the road after a four year absence, commitments for TV&GWOT, our charitable Trust; plus, of course, the 'day' job which actually involves working nights)... 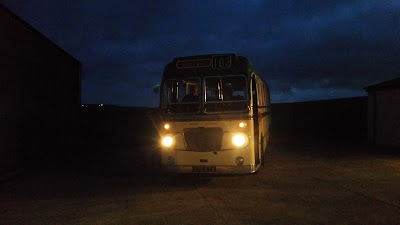 Our friend's Winter hibernation actually turned out to be shorter than many people's Christmas holidays, with a Trust Open Day in Devon at the start of January, for which a tour on a genuine Kingsbridge coach was essential. The route took us through now familiar Kingsbridge Running Day territory across Gara Bridge, through the valley, past the former Loddiswell Station and up the hill to home. 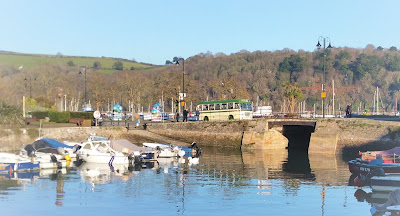 A week later, we were visited by Isle of Wight royalty, Ben and Charissa Bartram (of Beer and Buses fame), calling for another tour, this time along the route of former 93 through Blackpool Sands to Dartmouth. I don't recall the original 93 stopping at farm shops for breakfast and beach cafes for ice creams, mind...

We'd barely had time to tear off a few sheets of the loo roll list before we were back in action for Exeter Bus Station's farewell event in March.

This was originally to be the final weekend of operation for the iconic Paris Street bus and coach station (whose heritage, you'll remember, we celebrated back in 2012), before demolition and redevelopment as the inevitable hyperspace bypass, or whatever is planned. In fact, we may have another chance to come back and do it all over again, as issues with the developers mean that it will remain open for now.

The day went ahead nonetheless, and 420 was to represent the many Western National coaches which have passed through it over six decades, with short workings of a Royal Blue route to Pathfinder (we haven't always found our way there successfully... have we?) and a trip to Exeter airport.

Having an SU amongst your wedding guests automatically means that when little babies come along, buses and coaches are already in the DNA. 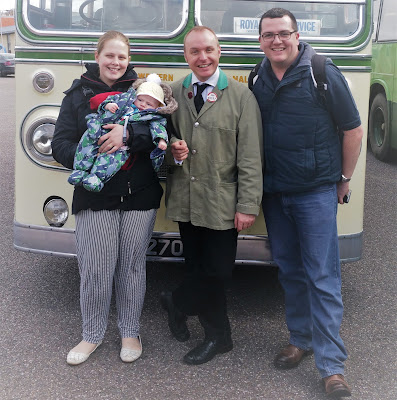 It was a delight to take baby Oscar for his first SU ride around his home city, along with Mummy and Daddy, Nanny and Grandad, while Uncle Matthew was hard at work with his camera... and poor old Uncle Tom was just hard at work. 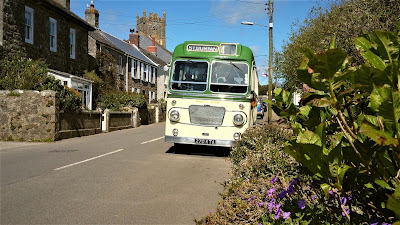 Our trips to Penzance, for our annual Vintage Bus Running Day, are never taken lightly. Your scribe's preventative maintenance policy goes into overdrive when faced with the 400 mile round trip, and several little jobs were completed ahead of this year's pilgrimage.

This year, we were joined by SU royalty, in the form of Trevor and Shirley Leach - owners of West Yorkshire SMA 5 - and also favourite Uncle and Aunt to my SUs. It was just as well, as routes this year were as adventurous and complex as ever, and the Conductor's role was not an easy one. In Ludgvan, a Church service had to be interrupted to ask for a hazardously parked car to be moved to allow us to proceed. The owner wasn't forthcoming, but we found a way through without incident. Bravo for the calming influence of a Yorkshireman and his good lady wife!

Less hampered by bad parking, our little trips to Sancreed were a highlight for photographers and crew alike. Our friend's shimmering sausage proved popular with the cameras...

The SU owner becomes quickly accustomed to tricky routes, and the wonderful Taunton Vintage Bus Running Day, in May, gave us a new challenge - the 280 to West Monkton. Operated by SULs for many years (most often 268 KTA, but perhaps even 270 KTA during its Taunton years, 1970/1).

Our friend was to be the first SU to return to the village in many decades. 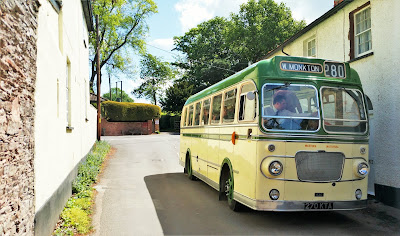 So, you see, silence can be deceptive. My next challenge will be to bring 270 KTA's brother's blog up to date with all that's happened on his restoration amidst these adventures. Pop along there in the next few days for an update, but brace yourself - it's been far from quiet... 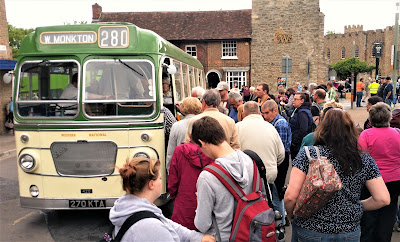 Posted by David Sheppard at 09:41 No comments:

How better to convey the spirit of our island adventure than this video, taken aboard our first trip to Gurnard on Saturday 15 October 2016 - the first of such operated by a Bristol SU in over 40 years.

The film captures our first departure from Cowes (Westhill Road), and shows our friend meeting some of the island challenges with great aplomb. Listen carefully for witty ripostes from Conductor Farley, buoyed up by the triumphant atmosphere of this heady occasion. 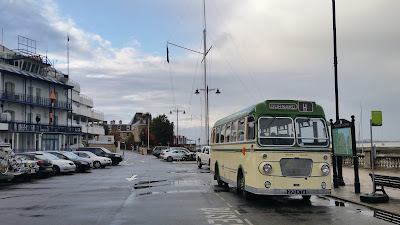 Here we are at The Parade in Cowes, having conquered Gurnard, smiling as if mischief is being done - and yet, so far, so good...

As it turns out, our friend's performance was impeccable on this and every other island trip, almost as if to prove a point. These were happy times and, as if in defiance against Southern Vectis' dim view of his type, 270 KTA showed aptitude and willingness at every turn. And on this route, there were many... 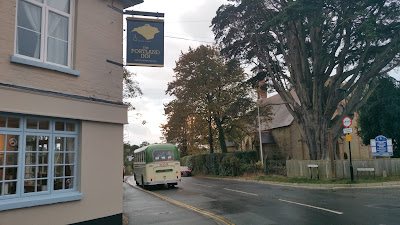 This being the Isle of Wight Beer and Buses Weekend, most turns were outside pubs, and jolly revellers frequenting the northern network of the weekend's bus network joined us in steady numbers, especially on the Sunday. 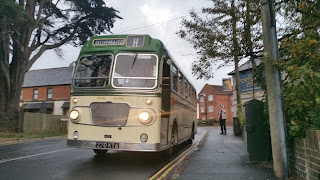 Even the draw of liquor was not enough to coax 270 KTA's stalwart crew away from duty, however, and our friend proved a constant performer on Route H throughout the weekend, shifting crowds with near-full loads at busy times, with especially heavy duties after Sunday lunch.

Perhaps there was something to keep Driver and Conductor from the crowds for at least 10 minutes, when a break at Cowes allowed for fish and chips while a marshal stood guard over our friend... 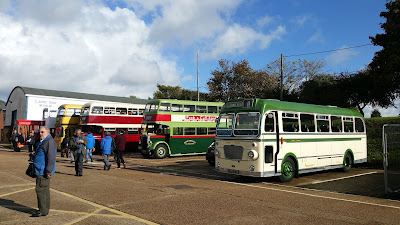 This was a truly memorable weekend for all the right reasons and 270 KTA lived up to the trust placed in him by a begrudging yet doggedly optimistic owner, who was thus proven both wrong and right by a steed which performed faultlessly throughout.

Few things in life are worse than leaving the Isle of Wight, and the journey home was a very sad affair, made bearable only by two things... 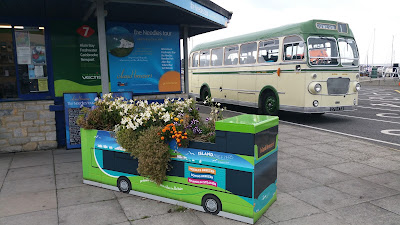 1) Great memories from a wonderful holiday for coach and owner alike; and... 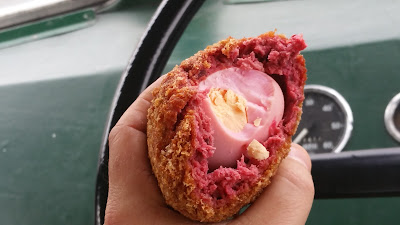 Water miles not included.
Posted by David Sheppard at 16:34 No comments: