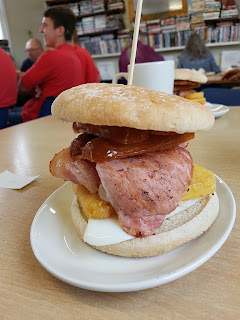 Established readers will recognise this as a sign of peace at 270 KTA headquarters.

Another triumphant MOT means another Woody's Wonder Breakfast (allowed only after a pass) at Sourton Services... and, of course, another year of motoring. Let's never take that for granted.

I say it's a sign of peace, it isn't quite. In recent weeks our friend and I have fallen out over several small issues, not least a bloody irritating whistle coming from the exhauster (which creates vacuum to assist the brakes). The whistle only occurs when the engine is really warm and, hence, two attempts to solve it when cold have failed.

On our trip home from Guscott's yesterday, we were treated to a unique concert piece - imagine Roger Whittaker meets Le Pétomane. 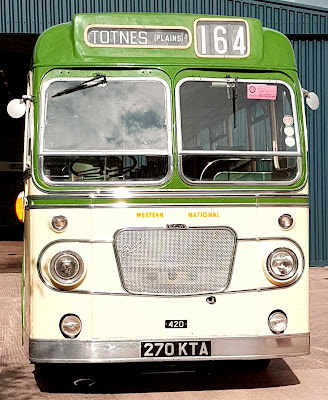 The culprit is, I'm pretty sure, the copper washer which sits between the exhauster and the banjo bolt on its side. It's a bespoke size, so not just a straightforward change, and the usual warm-up/cool/replace routine hasn't worked. Nor has covering the whole assembly with sealant in a fit of rage at the roadside. So I'm about to have some new washers 'made special' as Doris Hare would say - enough for the Brother and other relatives should they start these cabaret performances of their own.

All being well, we'll be enjoying a quieter Kingsbridge Running Day together on September 16. Come along and listen...
Posted by David Sheppard at 20:16