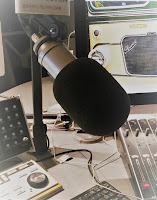 In his other life, your scribe has often been called upon to inflict the pain of the Mystery Sound competition - that most annoying of radio devices, designed to torture the listeners into coming back day after day to find out what's making a noise.

And mystery sounds are a form of torture.

I once got involved in a prank where, by the miracle of radio, we played a different mystery sound from each transmitter so that listeners in different towns each heard a different (yet completely obvious) 'mystery' sound, then phoned up to tell us what it was. To those who'd clearly heard the sound of a dog barking, imagine the delight of someone else phoning up to ask, earnestly, "Is it a duck, David?"... followed by another: "Definitely a cat"...

It's not so funny when you're not the one with the right answer, I've recently discovered. For the past few weeks, the quizmaster and prankster has been someone you know very well - my usual tormentor. 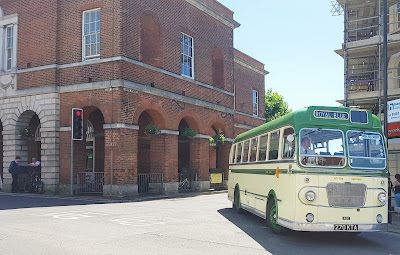 420's Mystery Sound competition was first launched on arrival in Northampton during our unexpected participation in this year's Royal Blue Run. Passengers said (or kindly pretended) they couldn't hear what I was worried about - but owners know, don't they?

As previously explained, the mystery sound has been half squeak, half whistle, and has only been 'played' when the engine is warm - about 8 miles into every journey.

This owner initially diagnosed it as a fault with the coupling plates on the shaft which drives the injection pump. These are known to squeak when they fracture so, surely, this was the mystery sound. "Is it a coupling plate?", asked Contestant Number 1, David from Exeter.

It was a good answer but not the one 420 was looking for - even though the bolts on the coupling did benefit from some tightening. 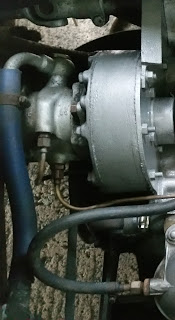 Further investigation by the quizmaster-turned-contestant concluded that the mystery sound was actually a vacuum leak (i.e. air rushing in) close to the exhauster, the unit which creates vacuum to assist with braking. I discovered that, if pressure was applied to the main pipe, the mystery sound would stop; so, I concluded that the banjo joint between the pipe and the exhauster was at fault.

As previously mentioned, new copper washers were produced to seal it all up - and yet the mystery sound went on....

The banjo bolt itself was then eyed with suspicion, with the equivalent part being borrowed from 420's brother (not likely to need to build a vaccuum for a few months yet) for a quick test... still not the right answer.

Several words were said that would have resulted in the termination of our competition, and probably employment, had this actually been on the radio.

After several tweaks to the banjo, fellow contestant Alan Neale - who could hear the whistle all the way from Bristol - observed that pressure applied directly to the exhauster itself had the same effect as pressing the pipe - it stopped the whistle. 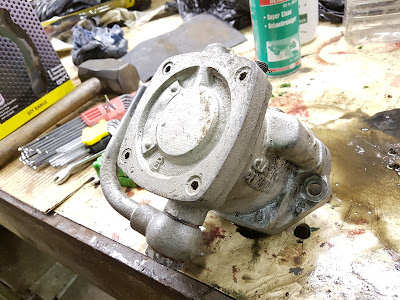 So it appeared that a leak in the body of the exhauster was responsible for our Mystery Sound. Having carried out the hideously fiddly task of removing it with the engine in-situ (this was two days before Kingsbridge, by the way), this was confirmed. The screws which hold together the main body of the exhauster had worked loose, and this was causing a hairline gap trough which air was whistling... like a milkman's pursed lips. 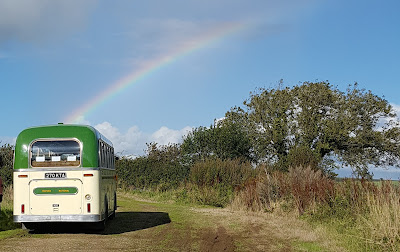